Introduction
Upon switching on mobile phone, it will start to search for available cellular networks nearby, and register itself into the subscribed network using some secrets in USIM card. In this chapter, we will discuss how 5G-AKA has improved the security of this process. However, in order to understand it better, we need to go through some history from 2G (GSM), 3G (UMTS) and 4G (LTE) first. It would help us understand why 5G-AKA is designed in this way.

What is AKA
Authentication and Key Agreement (AKA) is a set of rules (i.e. a protocol) to allow mobile phone and core network to exchange their identity and secret keys for communication. Authentication is a way to make sure both two parties are trustworthy: let say if you want to go to the university library, you will check the address of the library to make sure the library is not a fake one. At the same time, the library staff will also ask you to show your student ID card to make sure that you are the eligible users (e.g. student) of this library. Key agreement is a way of negotiating one common secret key without revealing the key to any third parties. Diffie-Hellman key exchange or computed keys based on common secret are some commonly used methods.

AKA in GSM:
Here is the simplified flow of GSM attach authentication process (EAP-SIM, RFC 4186). 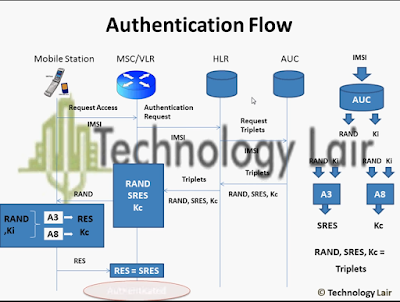 In the picture it shows that, when the mobile device is switched on, it will immediately send a request access message which contains the IMSI of the USIM to MSC. Then, VLR will only send a RAND signal to UE to ask for its reply. Also, the final judge of authentication success is located in VLR. As a result, it will have (at least) these 3 main problems:
Not to mention that the predictability of A3 and A8 algorithm could be higher than expected, it is easy to justify that GSM is insecure in many aspects.

AKA in 3G (UTRAN, UMTS):
UTRAN (UMTS Terrestrial Radio Access Network) had improved the authentication system slightly. The main focus of the improvements are generating more different keys for different controls. Although the term "temporary identity (pseudonym)" is appeared in EAP-AKA (RFC 4187), the actual implementation still largely follows the GSM way - IMSI is sent in clear text during registration.

AKA in 4G (E-UTRAN, LTE):
After some painful lessons from 2G and 3G, 4G LTE tried to tackle the problem of mutual authentication and user tracking. Here is the simplified flow of EPS-AKA: 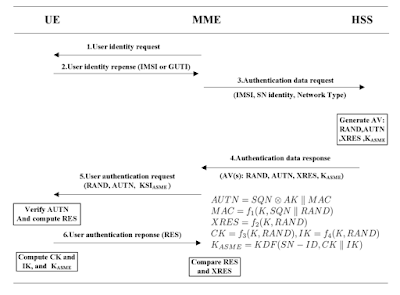 After the first registration which uses IMSI, the USIM will be assigned with a new temporary identity called GUTI. This GUTI will be used for next registration, and it will be updated periodically to prevent eavesdroppers to trace the device easily. Besides, since the cellular network will send an extra field (AUTN) to UE as a feedback, UE can use it to make sure the network is legitimate. Unfortunately, there are still some problems found:
Some people asked why 4G LTE is still widely used with so many security issues.
However, think about that:
---

AKA in 5G (5GC, NR):
Finally, we have come to 5G era. The new implementation looks like the following: 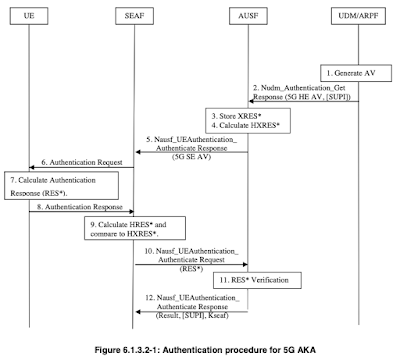 If you look close enough, you will find that the authentication process still looked very similar to EPS-AKA. However, there are some major improvements:
In fact, there are some researchers doing formal verification of 5G-AKA, and they provided quite reasonable comments about it (check here).

By the way, since 5G supports Non-3GPP AN, 5GC will support various AKA protocols such as EAP-AKA' (improved EAP-AKA) and EAP-TLS. Also there will be a specific functional entity (N3IWF) to handle the signal transmission in Non-3GPP AN. Since this part is also quite complicated, so I will skip it until I need to write them.

Email ThisBlogThis!Share to TwitterShare to FacebookShare to Pinterest
Labels: 5G, AKA, Diffie-Hellman